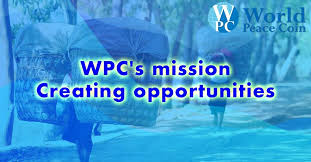 WORLD PEACE COIN: THE FIRST CRYPTO-CURRENCY WHO CARE ABOUT THOSE IN NEEDS

A blog by Lamidi Muhammed Barki

WHAT IS WORLD PEACE COIN ALL ABOUT: world peace coin (WPC) is a cryptocurrrency that aims to route out the world poverty. WPC contributes to creating opportunities for people in needs. WPC enables you the real-time settlement with a low remittance charge. The maximum amount of WPC is set at 2.5 billion and we will donate 10% of them which is equivalent to 250 million to developing countries. WPC contributes to creating opportunities for people, who have neither bank accounts nor access to financial services, to live their independent lives.

Furthermore, it utilizes its own artificial intelligence (AI) system called “TSUMUGI” which calculates credit scores of people with no bank account so that it is capable of providing the revolutionary system, Proof of Lending (PoL), that enables WPC owners to mine while financing.

That means, WPC provides opportunities for people who need a finance to live their independent lives by analyzing big data with AI and calculating their credit scores.

We checked the site and the documentation of WORLD PEACE COIN for sufficiency and consistency in order to make an investment decision.

The documentation consists of a white paper available in English. The submitted documents do not describe WORLD PEACE COIN in sufficient detail. The strategy for implementing cryptocurrency in the market, business model, mechanisms of user interaction with the cryptocurrency and the role of the WPC token are not fully disclosed.

The website also provides information about the project, the staging of the public ICO, the plans for WPC distribution, advisors and the team. The site is available in Chinese, English and Japanese.

The WPC cryptocurrency is built on the basis of blockchain technology. This blockchain is characterized by a block generation time of 2.5 min, and a block size of 1 MB.
WPC is also built using Proof-of-work and Proof-of-Stake until 2020, after 2020 the team plans to move to Proof-of-work and Proof-of-Lending, which provides an opportunity for holders of WPC to mine during financing.
Proof of Lending (PoL) is an original means of obtaining WPC: WPC holders in developed countries finance WPC users in developing countries. Anyone who has WPC can be a miner.
A developed TSUMUGI system using AI technology is used to calculate credit points.

Engineering features of the platform

The platform will function as follows:

Engineering features of the platform

The platform will function as follows:

Tokens are sold in several stages:

Comments: 5% of WPC sold will be available for conversion and exchange on major cryptocurrency exchanges from June 2018.

ICO has become a new way of raising funds for companies trying to launch a new business and is used around the world. With ICO, it became possible for companies to offer their own cryptocurrencies to investors and to raise funds for a new business.
We held presale of WPC in October 2017 and plan to hold pre-ICO on December 20th, 2017~January 20th,2018.
We set our target amount of pre-ICO to USD 10 million and are going to use it for development, marketing and the upcoming ICO. ICO is scheduled on March 25th, 2018~May 23th, 2018 (UTC).
Target amount of ICO including pre-ICO is USD 20 million. The sales of them are going to be handled on Ethereum and bitcoin and the price is as follows.

Entries in this blog

No blog entries have been created